Iran lashes out at US, Israel over ‘hypocritical sympathy’ for Lebanon

Long-time commander of Palestine Liberation Army passes away in Damascus

In a remarkable raid, two Turkish soldiers were taken captive by ISIS militants on the outskirts of al-Bab earlier today. Although details are vague, the Turkish troops were embedded with Syrian rebels fighting under the banner of the Free Syrian Army (FSA).

The incident took place near the village of Dana (northwest of Al-Bab) and was first alleged by Amaq Agency on Tuesday afternoon but later confirmed by Ankara. According to Turkey’s Ministry of National Defence, the Turkish Armed Forces have “lost contact” with the two soldiers who’s fate is now in the hands of the Islamic State.

At least 17 Turkish soldiers have been killed during operation ‘Euphrates Shield’, a rebel offensive which has seized large swaths of territory along the Turkish-Syrian border from ISIS and the US-backed Syrian Democratic Forces (SDF).

I just hope these two ones aren’t conscripts as, in this case, well, they didn’t signed a pact with the devil, they just had no choice…

Poor soul. Erdogan’s fault. @ Amin: he might be a conscript. And AFAIK about half of Ankara’s conscripts from Anatolia are no ethnic Turks.

If they knew their fate, they would never join army. Capturing by ISIS is the worst thing that can happen to a mankind whether be Turk or a non-Turk even though

Well, al-Zinki is also with the Turkish backed “FSA” and they’re not better than IS… Actually, US withdraw any vetting for them as evidences of other beheadings surfaced…
And when it comes to Turkish army :
https://twitter.com/TheDaneChris/status/792438510548553728/video/1
http://kurdishdailynews.org/2016/01/09/iwa-condemns-extrajudicial-killing-of-kurdish-women-in-silopi/
https://www.hrw.org/news/2016/07/11/turkey-state-blocks-probes-southeast-killings
https://www.thenation.com/article/turkey-is-fighting-a-dirty-war-against-its-own-kurdish-population/
And they dare to accuse PKK to be terrorists… Turkey is a terrorist state, period.

I put a picture but it seems its link is corrupt. Let me change the above link. Lets reveiew my words again. ” … even though

Some nice ones for you my friend : 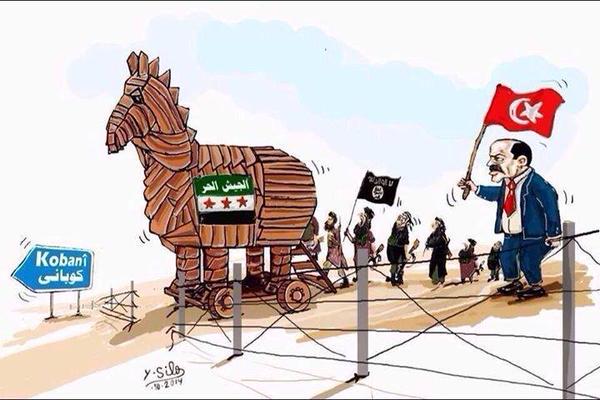 http://www.cartoonmovement.com/depot/cartoons/2014/10/28/erdogan_dream__hassan_bleibel.jpeg
IMHO, ErdoGollum will enter the Guiness Book as the most cartooned politician ever! Well, he looked for this, he’s reapeing what he sown…
He’s also innovating in another domain : following the murder of 3 Kurdish activists in France, it’s the 1st time a foreign intelligence agency is sued in my country, moreover, the case will be judged as a terrorist act so, the Turkish MIT is very likely to end on the EU terror-groups list!!!!!

“the Turkish MIT…. on the EU terror-groups list” LOL. It looks like Erdolf Sultan not only admires the power of the Führer: http://www.telegraph.co.uk/news/worldnews/europe/turkey/12077703/Turkeys-president-says-all-he-wants-is-same-powers-as-Hitler.html The Sultan’s policy is also comparable to the WW II treatment of e.g. the Polish. The Führer’s excuse was the Polish treatment of ethnic Germans after WW I. Plus for him they were eastern subhumans. p.s. SVP note: That IMHO all such condemning of a whole nation for crimes (imaginary or not) of individuals or groups from that nation can lead to new crimes including ethnic cleansing and genocide (partial, regional or complete). Planned and only partially… Read more »

Well, for a fascist state, resistants are terrorists. From the Nazi POV, my grand father was a terrorist and had they caught my other grand father after he pierced the tires of a whole column of vehicle (they searched the whole town to get him), I can tell you I’d have never knew him… NB : When I say *** country is doing this, it’s understating its govt. KSA is absolutely deplorable, I’ve got absolutely nothing but great compassion for all the al-Saouds’ “subjects”. I have great doubt about the totalitarian side of the PKK : ideologically, they’re into Bookchin’s… Read more »

Thx for the excursion on Bookchinism. Yes I remember reading Orwell’s My Catalonia. Syria currently reminds me of their political situation. Assad’sside just takes the last bigger population center – judging from the past the bell tolls for the Takfiri – like the past Caudillo the current president can now drown the other side with conscripted men. p.s. From the resistance POV all compatriot dissenters and foreign soldiers of a political leaning which they view wrong are terrorists too. And they feel entitled to shave their heads, or do worse and even after decades burn the houses of those that… Read more »