US military withdrawing from bases near Syrian border

Turkey prepares to receive extra S-400 system despite US threats

Russia to play important role in reconciling Hamas and Syria

Breaking: US Coalition to withdraw from several bases in Iraq after rocket attacks

Chinese military to get suicide drones

Home Iran Suspected oil tanker attack in Gulf of Oman: what we know so...

The tensions in the Middle East are back up to boiling point after a second incident involving tankers along the world’s most important oil chokepoint. So, here’s a round-up of all the relevant news that broke this day.

Two oil tankers were hit in an apparent attack in the Strait of Hormuz, about 70 nautical miles from the UAE port of Fujairah and about 14 nautical miles off Iran’s coast.

One of the vessels was the Aframax-class Kokuka Courageous tanker, registered in Panama and operated by the Singapore-based Bernhard Schulte Shipmanagement.

The other was the Front Altair, a Marshall Islands-flagged crude oil tanker owned by Norway’s Frontline.

How Serious Was the Damage?

This is where some media outlets contradict each other.

Bernhard Schulte said that Kokuka Courageous was “safely afloat”, but its starboard hull was breached above the water line. Its 21 crew members had safely abandoned the tanker, with one crew member being slightly injured.

Kokuka’s cargo of methanol was intact, according to a spokesperson for the vessel’s manager.

Meanwhile, Iran’s state-run IRNA reported that Front Altair, which was carrying 75,000 tonnes of naphtha, had sunk.

Frontline chief executive Robert Hvide Macleod was quick to debunk the report. “I can confirm that the vessel has NOT sunk,” he said in a statement to AFP, adding that the 23 people on board were “all safe.”

Maritime intelligence firm Dryad Global said the ship hadn’t sunk but was “on fire and adrift.” Aerial footage from the area appeared to show that a huge blaze resulted from the incident.

ALSO READ  Erdogan says Iran and Russia are not targets in Syria, only Syrian military

Who Rescued the Sailors?

While both Frontline and Bernhard Schulte confirmed that the crews were safe, controversy aroused as to who rescued them.

The IRNA reported that Iranian recuse teams evacuated the 44 sailors from both vessels and took them to the Iranian port of Jask. However, US officials were quoted by CBS as calling these claims “patently false.”

Shipping newspaper TradeWinds reported, citing sources that were close to the site, that Frontline’s crew was picked up by South Korean cargo ship Hyundai Dubai.

The US Navy’s Bahrain-based Fifth Fleet also reported earlier in the day that it was rendering assistance the vessels after they had sent distress signals to ports in the vicinity.

Was It an Attack?

There has been no immediate confirmation, but several sources suggest that the vessels were likely struck by torpedoes. Norway’s maritime authority said that Front Altair was “attacked” and there were three blasts reported.

Iranian media, which were among the first to break the news about the incident, said two consecutive explosions were heard in the area.

What Was the Reaction?

Unnamed US defence officials were quick to blame Tehran, telling CBS it was “highly likely Iran caused these attacks”.

According to White House press secretary Sarah Sanders, Donald Trump has been briefed on the incident while the government “is providing assistance and will continue to assess the situation”.

Russia has warned against “hasty conclusions” and “any attempts to lay the blame on those who are unwanted by a number of well-known states.”

Iran’s foreign minister said the timing of the suspected attacks is “suspicious” as they coincided with the visit of Japanese Prime Minister Shinzo Abe to Iran to cool mounting tensions with the US.

His comments came shortly after the Japanese Trade Ministry said the two vessels had “Japan-related cargo”.

The EU’s diplomatic chief Federica Mogherini called for “maximum restraint and avoiding any escalation on a military side”.

The United Kingdom expressed concerns about the incident and is now “in contact with local authorities and partners in the region”, according to a government spokesperson.

Meanwhile, the Norwegian Maritime Authority called on its ships to maintain a safe distance from Iranian waters, while the country’s foreign ministry said that such incidents “contribute to a further escalation of tensions in the region”.

Investors are among the most sensitive observers, as usual; Oil prices jumped by 4 percent on the news.

It comes just a month after another mysterious incident in the Gulf of Oman, in which four commercial vessels docked off the UAE coast were targeted by limpet mines placed by trained divers, according to Emirati investigators.

The UAE concluded that it was likely the work of a “state actor” but stopped short of naming Tehran. The United States, on the other hand, was quick to directly blame Iran. The rationale, top US officials said, was to raise global oil prices – a charge Tehran denied.

The US and Iran are embroiled in an escalating war of words and even military escalation, which followed Donald Trump’s withdrawal from the 2015 nuclear deal and the introduction of crippling economic sanctions. Washington has been pursuing a “maximum pressure” policy, meant to bully Iran into negotiating a new nuclear deal, since Donald Trump believes the previous one did not stop the Islamic Republic from pursuing nuclear weapons development.

ALSO READ  US claims Iran is stepping up support to Houthis

Guest
Nigel Woo
You can flag a comment by clicking its flag icon. Website admin will know that you reported it. Admins may or may not choose to remove the comment or block the author. And please don't worry, your report will be anonymous.

ANNUNAKI, JEWS MUST BE HUNTED DOWN LIKE ALIEN MOVIE EVEN GOD WERE KIND AND MERCIFUL (HITLER LEGACY)
https://warcraftking.tumblr.com/post/185418440644/good-cannot-defeat-evil-without-cruelty-cos

DYING ARE NOT FEARING, WHERE JEWS GOING IS

FairsFair
You can flag a comment by clicking its flag icon. Website admin will know that you reported it. Admins may or may not choose to remove the comment or block the author. And please don't worry, your report will be anonymous.

Ah, since there is only one country with submarines around, and it’s neither Saudi-Arabia, nor UAE, nor Oman, nor Qatar, nor Iraq, nor Kuwait, nor Yemen, nor Egypt. That it’s neither the interest of any western nation, nor China, nor India, nor Pakistan to see a surge in oil prices… Well, Russia may see some interest in increasing oil prices, but since they’re trying to stabilise the region… A false flag by Israel is dubious : their subs are based in Haifa, they would have been noticed in the Suez channel… +++ “Russia has warned against “hasty conclusions” and “any… Read more »

+++ “The EU’s diplomatic chief Federica Mogherini called for “maximum restraint and avoiding any escalation on a military side”.”
>>> Limpet mines and torpedoes used against ships, missile on the terminal of a civilian airport… Errr, Federica, are you blond?

Seems you are…
Let me give you a little lesson in diplomacy :
This is 42,500 tons of diplomacy :

And there, we weight diplomacy in… 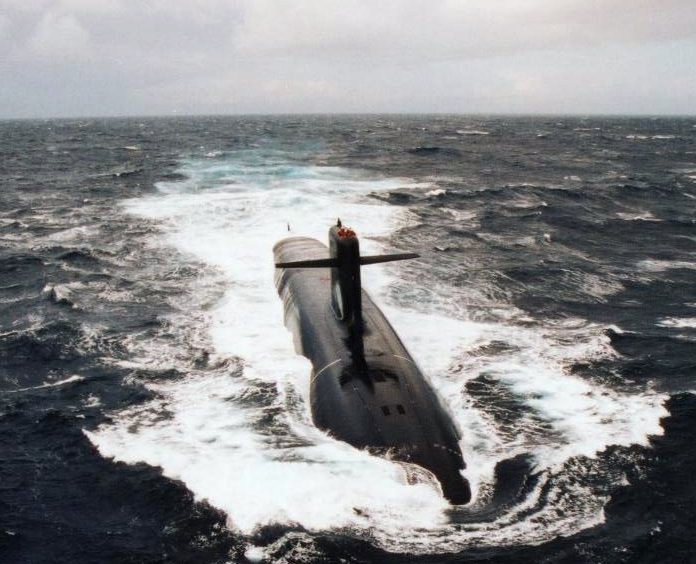 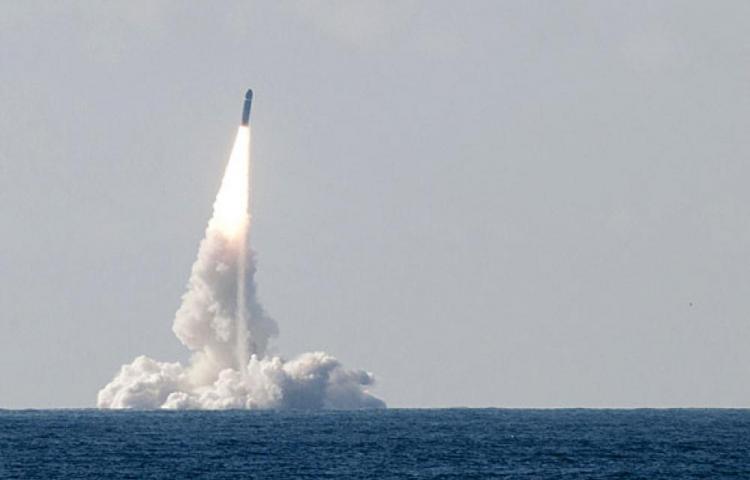 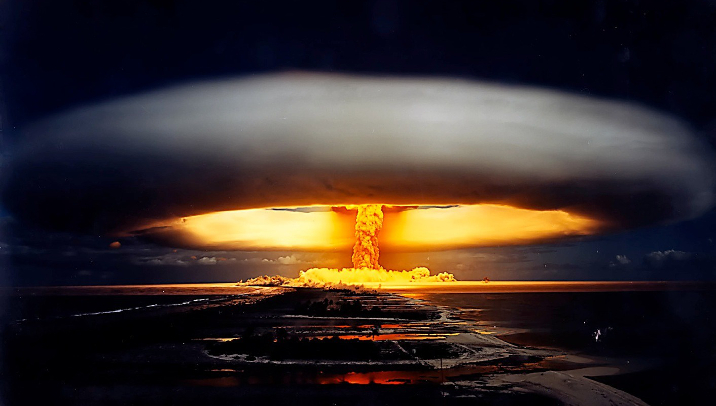 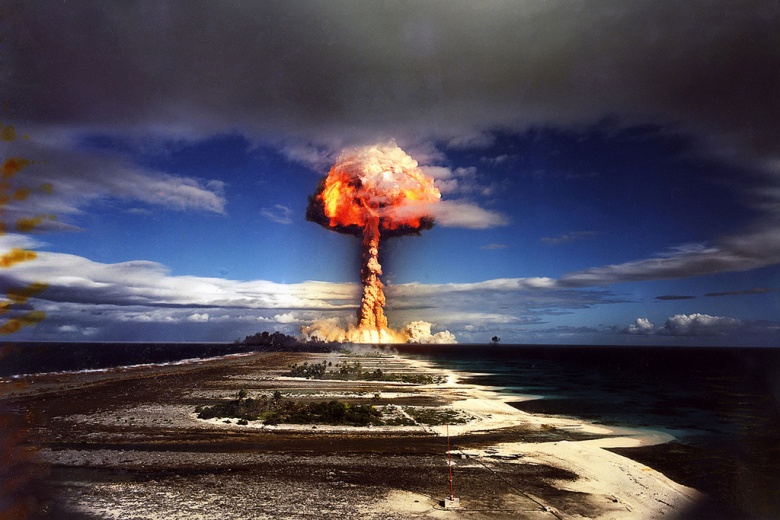 Pics from the 1st French megaton yield bomb on the Mururoa atoll…
This is real politik.